We are sorry, but your browser is unsupported by our Course system. Please use a different browser.

Do you know what parallel circuits are and how they work? How about diodes? Here's a snippet from an actual schematic for a Frigidaire wall oven, exactly the kind of circuits you would encounter on a service call. Let's see whatcha got! 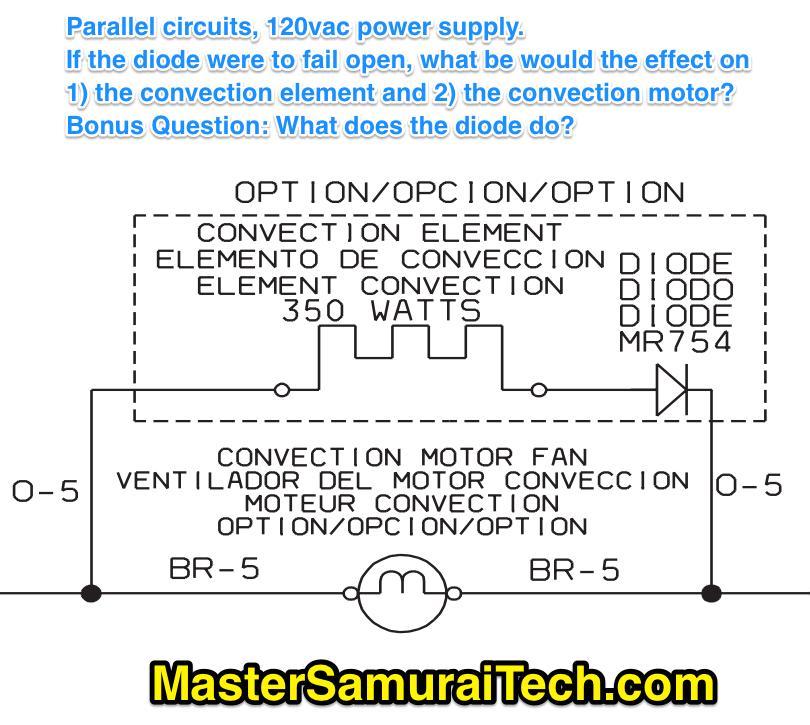 If you don't get it, don't feel bad-- sadly, most of your fellow appliance techs, even guys with 20 years of experience, don't understand this stuff, either. We can help you master basic electricity, series and parallel circuits, reading schematics, electric motors and more in our comprehensive, self-paced, online Core Appliance Repair Training course.

Check out the Core course today!

We'll take you way beyond the simple stuff, like the circuit above, in our Advanced Schematic Analysis and Troubleshooting (ASAT) training course. You can optionally bundle the Basic Electricity Boot Camp with the ASAT course for a top-notch electrical education specifically tailored for appliance techs using real-world examples from modern appliances.

Check out the Advanced Schematics Course

Now for the answers to the quiz...

That is one of the more absurd examples of what I call "appliance tech mythology."

You have to start with the understanding that electric current is nothing more than dumb electrons moving in a directed flow. Why do I say electrons are dumb? Because some techs seem to think they have a mind of their own and move in strange and mysterious ways.

The reality is that electrons move when, and ONLY when, there is a voltage difference between two points and they have a complete circuit. Electrons, being negatively charged, will be pushed away by negative voltage and "sucked in" by positive voltage. Provided there's a complete circuit (no breaks or opens), the electrons will move in response to that voltage difference as surely as water flows downhill. It's really that simple. Keep this in mind when we look at parallel circuits...

So in the circuits above, if the diode failed open, the electrons can't flow through that branch anymore because there's no longer a complete circuit.

What happens to the voltage in that branch with the open diode?

Nothing, it stays the same.

What happens to the current in the branch circuit with the open diode?

It goes to zero because the electrons can't flow anymore.

So what happens to the convection element?

Alright, now what happens to the voltage in the other branch with the convection motor?

Nothing. Why should it change? It is the source voltage, 120 vac, and it stays the same as long as the power stays on.

Okay, now the bonus question: What's the function of the diode in the convection element circuit?

Well, to answer that, you first have to know what diodes do. They can actually do lots of different things but this particular one is a rectifying diode. How do I know that (we'll get to what that means in a minute)? Because the schematic calls out the diode type: MR754. Google it.

What does a rectifying diode do? This:

The AC power comes in as a full sine wave but gets half its cycle chopped off by the diode. That's because the diode is forward biased during half the AC cycle, keeping the circuit closed and conducting current, and reverse biased during the other half of the cycle, becoming open for that half cycle and stopping current flow. The end result is that the heating element is only getting about 60 vdc instead of 120 vac.

Not getting that forward and reverse bias thing? Don't worry-- we go into detail on that in the Core training course.

Check out the Core course today!